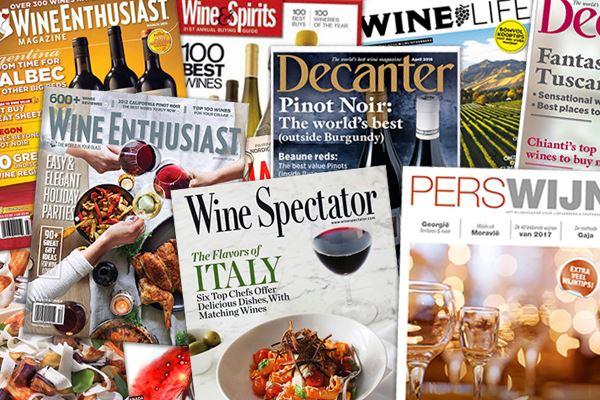 The driven, energetic Stéphane Vedeau is quickly establishing La Ferme du Mont as a top source for Grenache-driven wines from the Southern Rhône. While I had met Vedeau on a few occasions in New York and Montpellier, this was the first time I made it to his winery in Valréas. While he's a believer in long macerations of five to eight weeks, much of that time is at relatively low alcohol levels, as he's a proponent of aqueous extraction to avoid pulling harsh tannins from the seeds. La Ferme du Mont has 35 hectares in production, with vineyards in Vacqueyras, Gigondas and Châteauneuf du Pape, as well as in Côtes du Rhône and Côtes du Rhône Villages. Vedeau also owns Clos Bellane, with another 48 hectares, mainly in Valréas. He makes the wines for Domaine Lux Fontis, which has vineyards in Gigondas and Châteauneuf du Pape, yet another iron in the fire. These are exciting wines that showcase the elegance it's possible to achieve through gentle winemaking, even in warm climates.

2017 La Ferme du Mont Côtes du Rhône La Truffiere Blanc : 91 points
A blend of five varieties (Grenache Blanc, Clairette, Viognier, Roussanne and Marsanne), the 2017 Cotes du Rhone Blanc la Tuffiere offers aromas of struck flint and chalk dust upon opening, but it broadens out with air to reveal hints of honey, melon and tangerine. It's plump and succulent on the palate, turning crisp and peppery on the finish.

2016 La Ferme du Mont Côtes du Rhône Premiere Côte : 90 points
The exuberant 2016 Cotes du Rhone Premiere Cote is a blend of 60% Grenache, 30% Syrah and 10% Mourvèdre, aged predominantly in tank. Hints of garrigue and truffles accent ripe berries, while the medium-bodied palate is silky in texture and finishes long and savory. It's a dynamite wine for drinking over the next several years. Tasted twice, with consistent notes.

2016 La Ferme du Mont Côtes du Rhône Villages Le Ponnant : 90-92 points
A 60-40 blend of Grenache and Syrah, the 2016 Cotes du Rhone Villages le Ponnant combines ripe cherries and blueberries on the nose, a seriously big bowl of fruit, with just a light dusting of dried spices and garrigue-llike shadings. Medium to full-bodied, it's fine, silky and long on the finish. It should drink well for 6-7 years.

2016 La Ferme du Mont Gigondas Jugunda : 93 points
Hints of mocha mark the nose of the 2016 Gigondas Cotes Jugunda, a small portion of which spent time in oak. An 80-20 blend of Grenache and Syrah, this medium to full-bodied wine showcases notes of roses and raspberries, then adds dried spices on the finish. Fresh and long, it's a fine example of the elegance this appellation can exhibit in the right hands.

2016 La Ferme du MontVacqueyras Le Rif : 93 points
I appear to have underestimated the 2016 Vacqueyras Le Rif when I reviewed it last year and rated it 90 points. It's even better than that, marrying rose and tea-like notes with raspberry and cherry fruit. Silky and concentrated, it's more about elegance than power, yet it still lingers a long time on the finish.

2016 La Ferme du Mont Châteauneuf-du-Pape Vendange : 93 points
Stéphane Vedeau's entry-level CdP is the 2016 Chateauneuf du Pape Vendange. It's about 80% Grenache and boasts classic regional notes of lavender and rosemary layered over strawberry and raspberry fruit. It's full-bodied and supple, yet it remains fresh, buttressed by hints of orange zest on the long, silky finish. Already approachable, it should drink well for a decade or more. Tasted twice, with consistent notes.

2016 La Ferme du Mont Châteauneuf-du-Pape Capelan : 96 points
La Ferme du Mont's 2016 Chateauneuf du Pape Cotes Capelan is a fantastic example of Southern Rhône Grenache, albeit one made with a modern take (about a third of the wine was raised in barrels). Hints of vanilla appear on the nose, adding a bit of richness to the bright red berries and orange zest notes. It's a full-bodied, lush, creamy-textured wine, with fine tannins and hints of mulling spices on the long, silky finish. Great intensity, vibrant fruit and a plush texture make this a special wine indeed. Tasted twice, with consistent notes.